“Ethereum had an up and down Sunday, jumping above $1,640 before dipping back down to $1,540. The trading crowd continues to not believe the hype, and is expecting prices to fall heading into the FOMC meeting. ETH should continue to stay volatile.” 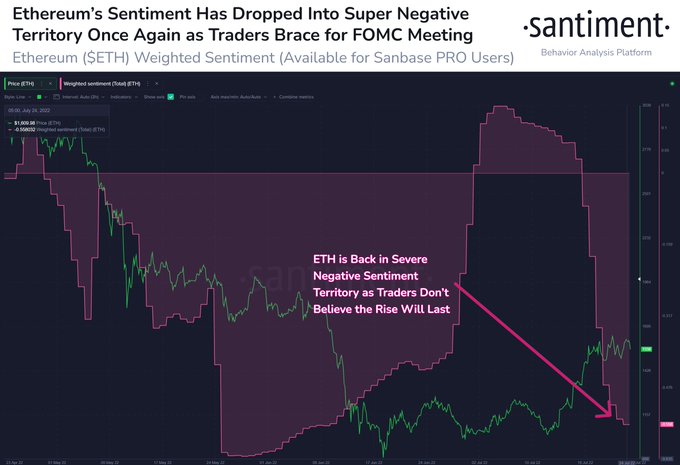 As part of the Federal Reserve (Fed), the FOMC determines the direction monetary policy will take, and it has resorted to interest rate hikes in the recent past. For instance, the interest rate was increased by 75 basis points (bps) last month, the highest surge in 28 years.

With the FOMC meeting slated for July 27, all indicators are that the interest rate might experience a similar hike. Mike McGlone, a senior Bloomberg Intelligence commodity strategist, recently stated:

“The Fed is using a sledgehammer on commodities and risk assets. Down about 20% since the June 75 bps rate-hike, the aftermath of another 75 in July may be similar for the three C’s – crude oil, copper, and corn. The stock market may be more vulnerable than crude.”

Meanwhile, crypto analyst Ali Martinez noted that Ethereum should hold $1,550 to avoid a pullback because it is a significant support level. He pointed out:

“Transaction history shows that Ethereum formed a significant demand wall at $1,550, where more than 586,000 addresses had previously purchased nearly 5.1 million ETH. Failing to hold above this vital support level could trigger a correction to $1,300.”

The second-largest cryptocurrency was down by 4.95% in the last 24 hours, with a price of $1,522 during intraday trading, according to CoinMarketCap.